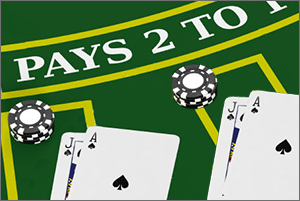 My country club locker room is a fascinating 19th hole observatory where human nature and intelligence often come into conflict. Almost all of my golfing buddies are risk takers by nature and many of them are gamblers — not just in the card room but also in the casinos in Las Vegas. Having spent some time in Sin City myself in my early 20s as one of the first blackjack counters, I was, and still am, most familiar with odds and the impossibility of beating the “House” in any game other than blackjack over a long period of time. Still, this commonsensical conclusion is not so obvious to many of my friends, who first of all, claim that they usually “break even” on any particular weekend jaunt, and secondly, suggest that they can win by using various betting “systems” that somehow allow them to claw back losses or stabilize winnings. An absurd example of this would be to triple your bet if you’ve lost 3 times in a row, and if you lose that, to quadruple your bet and so on. All of these illusions are derivatives of the so-called Martingale System, which claims that it is mathematically impossible to lose, given enough money and the willingness of the casino to take the increasing bet. The latter conditions, however, are where reality meets the road. A string of 4, 5 or perhaps 30 straight losses cannot work in the long run because the size of the bets eventually reach billions of dollars.

This same mathematical logic seems to have eluded central bankers around the globe. They are quite simply, employing a Martingale System in the conduct of monetary policy with policy rates now in negative territory for both the ECB and the BOJ — which in turn have led to over $15 trillion of negative yielding developed economy sovereign bonds. How else would one characterize the “whatever it takes” statement by Mario Draghi in 2014? How else would one interpret BOJ’s Kuroda when just last week he upped the ante in Japan by capping 10 year JGB’s at 0% until inflation exceeds 2% per year? How else would a rational observer describe Carney and Yellen other than “Martingale gamblers with a wallet or a purse?” Our financial markets have become a Vegas/Macau/Monte Carlo casino, wagering that an unlimited supply of credit generated by central banks can successfully reflate global economies and reinvigorate nominal GDP growth to lower but acceptable norms in today’s highly levered world.

An interesting counter to my Martingale characterization of central bankers is in fact that they dohave an unlimited bankroll and that they can bet on the 31st, 32nd, or “whatever it takes” roll of the dice. After all, their cumulative balance sheets have increased by $15 trillion+ since the Great Recession. Why not $16 trillion more and then 20 or 30? They print for free, do they not, and actually they make money for themselves and their constituent banks in the process. Why not? Why is there a limit for them as opposed to an individual gambler? If future inflation is the problem, then markets must know that that is their goal and what the increasing bets are geared to do. They are some distance from their 2% or 2+% targets so stay in the casino and keep printin’!

At some point investors — leery and indeed weary of receiving negative or near zero returns on their money, may at the margin desert the standard financial complex, for higher returning or better yet, less risky alternatives.

Well, a commonsensical observation made by yours truly and increasing numbers of economists, Fed members, and corporate CEOs (Jamie Dimon amongst them) would be that low/negative yields erode and in some cases destroy historical business models which foster savings/investment and ultimately economic growth. Our argument is that NIMs (net interest margins) for banks, and the solvency of insurance companies and pension funds with long dated and underfunded liabilities, have been negatively affected and that ultimately, the continuation of current monetary policies will lead to capital destruction as opposed to capital creation. Central bankers counter with the cavalier attitude of “let them (savers) eat cake” (buy stocks). “Our job”, they claim “is to promote economic growth in the short term and restore stability via ever ascending asset markets that eventually trickle down to the masses.” They claim that normalization will have to wait, and even then, the “new, new Normal” in terms of yields will be much lower than historical averages. I think that the latter contention is true, but central bankers cannot continue to double down bets without risking a “black” or perhaps “grey” swan moment in global financial markets. At some point investors — leery and indeed weary of receiving negative or near zero returns on their money, may at the margin desert the standard financial complex, for higher returning or better yet, less risky alternatives. Bitcoin and privately agreed upon block chain technologies amongst a small set of global banks, are just a few examples of attempts to stabilize the value of their current assets in future purchasing power terms. Gold would be another example — historic relic that it is. In any case, the current system is beginning to be challenged.

Ultimately though, in broader more subjective terms, it is capitalism itself that is threatened by the ongoing Martingale strategies of central banks. As central bank purchases grow, and negative/zero interest rate policies persist, they will increasingly inhibit capitalism from carrying out its primary function — the effective allocation of resources based upon return relative to risk. At PIMCO Christmas parties past, I used to praise my fellow employees for their part in the ongoing process of capital allocation. Yes, we were prosperous, I admitted, but we were helping the global economy and over 8 billion people to prosper as well — eliminating the deadwood, fostering new growth, and anticipating future headwinds. That can no longer be true — at PIMCO, Janus, or any other financial institution. Central bankers have fostered a casino like atmosphere where savers/investors are presented with a Hobson’s Choice, or perhaps a more damaging Sophie’s Choice of participating (or not) in markets previously beyond prior imagination. Investors/savers are now scrappin’ like mongrel dogs for tidbits of return at the zero bound. This cannot end well.