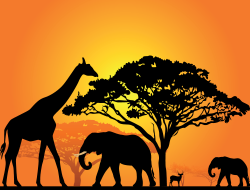 If I sang a song about Africa
Of the spotted giraffe, the hyena’s laugh
Of the fiery sun rising to meet the day
With a stillness belying the lion’s evening meal;
Would Africa sing a song about me?

If I remembered a time once in Africa,
Bride at my shoulder, chasing a leopard’s shadow
With human eyes and Nikon shutters wide apart
Invading the solitude of blackened ancestors;
Would Africa remember a time once with me?

If I knew a story of Africa
Capturing a disappearing continent for a moment in time
Fleeting – far briefer than the earth’s reign;
At least until its dusty death,
Would Africa know a story of me?

I traveled once to Africa, as you might have guessed by now, and it’s been a part of me ever since. Being perhaps the cradle of civilization, if not life itself, Africa casts an eerie glow over the entire history and, indeed, meaning of existence. There’s a strange beauty to it – this eat and be eaten land – brutal, yet fair and loving underneath its violent surface. I think it’s how I view my own life. I saw myself in Africa and, of course, through my own eyes I saw you there, too. The question however, that ends every stanza of my poem is whether Africa saw and will remember me. Are we just passing through without a trace following our dusty deaths? Will anyone, or anything, at the end of the line be the better for our time on earth? I,myself, know nothing of a grand scheme of existence, but I wish there to be one – if only to give meaning to our precious moments of happiness and frequent hours of despair.

Happiness has dominated risk markets since early November and despair has characterized global bond markets. Hope for stronger growth via Republican fiscal progress/reduced regulation/and tax reform have encouraged risk. The potential for higher inflation and a more hawkish Federal Reserve lie behind the 100 basis point move in the 10-year Treasury from 1.40% to 2.40% over the same time period. Are risk markets overpriced and Treasuries overyielded? That is a critical question for 2017.

The assessment of future growth and associated risk spreads is still uncertain of course. President-elect Trump tweets and markets listen for now, but ultimately their value is dependent on a jump step move from the 2% real GDP growth rate of the past 10 years to a 3%-plus annual advance. 3% growth rates historically have propelled corporate profits to a somewhat higher clip because of financial and operating leverage dependent on higher growth. 2% or less typically has smothered corporate profits. The 1% difference between 2 and 3 is therefore critical. We shall see whether Republican/Trumpian orthodoxy can stimulate an economy that in some ways is at full capacity already. To do so would require a significant advance in investment spending which up until now has taken a backseat to corporate stock buybacks and merger/acquisition related uses of cash flow.

I, for one, am skeptical of the 3 and more confident of the 2. The longer term negatives of my “New Normal” and Larry Summer’s “Secular Stagnation” may have disappeared from the business front pages of the FT and the NYT, but they have never really gone away – Trump or no Trump. Demographic negatives associated with an aging population, high debt/GDP now more at risk due to rising interest rates, technology displacement of human labor, and finally the deceleration/retreat of globalization pose negative ongoing threats to productivity and therefore GDP growth. Trump’s policies may grant a temporary acceleration over the next few years, but a 2% longer term standard is likely in place that will stunt corporate profit growth and slow down risk asset appreciation.

The critical question of interest rates and the future level of the 10-year Treasury is equally challenging. While the Fed has begun to tighten policy after abandoning Quantitative Easing several years ago, other major central banks continue to stoke the fire with as much as $150 billion of monthly buybacks. With the pinning of Japanese JGB 10-year yields at near 0% and the ongoing dovishness of Draghi’s ECB, global arbitrage effectively caps the 10-year at 2.4% to 2.6% levels. Currency adjusted yield pickups of 70 basis points by selling 10-year JGB’s or German Bunds and buying U.S. Treasuries, outline the artificial pricing of our 10-year, even as inflation moves higher and short term yields are raised by the Fed once, twice, or three times in the next 12 months.

When the fundamentals are confusing, however, technical indicators may come to the rescue and it’s there where a super three decade downward sloping trend line for 10-year yields could be critical.

So for 10-year Treasuries, a multiple of influences obscure a rational conclusion that yields must inevitably move higher during Trump’s first year in office. When the fundamentals are confusing, however, technical indicators may come to the rescue and it’s there where a super three decade downward sloping trend line for 10-year yields could be critical. Shown in the chart below, it’s obvious to most observers that 10-year yields have been moving downward since their secular peak in the early 1980s, and at a rather linear rate. 30 basis point declines on average for the past 30 years have lowered the 10-year from 10% in 1987 to the current 2.40%.

Now, however this super strong, frequently tested downward trend line is at risk of being broken. 2.55% to 2.60% is the current “top” of this trend line, and over the past few weeks it has held and reversed lower by 15 basis points or so. BUT———-. And this is my only forecast for the 10-year in 2017. If 2.60% is broken on the upside – if yields move higher than 2.60% – a secular bear bond market has begun. Watch the 2.6% level. Much more important than Dow 20,000. Much more important than $60-a-barrel oil. Much more important that the Dollar/Euro parity at 1.00. It is the key to interest rate levels and perhaps stock price levels in 2017.