by Jean Maltais
0
0 Comment
Economic Progress Doesn’t Equate
to Market Returns (Morningstar Research Oct 2017)
by : Daniel Sotiroff
One of the pillars of virtually every investment thesis
for emerging-markets stocks is these countries’
current or potential growth rates. The rationale typically
follows the line that sustained high economic
growth will fuel high rates of return for their respective
stock markets. This reasoning is more fantasy than
reality. Economic growth and stock market returns
have generally moved in the same (positive) direction
over long stretches of time. But there is little if any
evidence to support a relationship between annual
economic growth and stock market returns. History
has shown that this is the case not only for emerging
markets, but also for developed nations like the
United States.
Gross domestic product is the broadest and simplest
signal to use for measuring a country’s economic
growth. It is the sum of four components: personal
consumption, business investment, government
spending, and exports minus imports. Based on these
constituents, there would seem to be a reasonable
argument that the returns generated by publicly
traded companies could be related to economic
growth. Consumers or government agencies purchase
the goods and services produced by these firms
(personal consumption and government spending).
This activity generates profits that these companies
can use to reinvest and grow their businesses (business
investment). And firms can export their products
for sale in foreign countries (exports minus imports).
From January 1971 through December 2016, U.S.

GDP grew at a nominal rate of 6.4% annually. The total
return of the U.S. stock market, as measured by
the Wilshire 5000 Index, was 10.6% per year during
the same period. While different in magnitude, they
were at least similar in direction.
A similar situation has occurred in developing nations
overseas. China, for example, has experienced tremendous
economic growth in the past several decades.
From January 1995 through December 2016 its
nominal GDP grew by 14.5% annually. But investors
that used this strong economic growth to justify
investment in Chinese stocks were no doubt disappointed.
Despite exuberant economic progress,
the annual total return of the MSCI China Investable
Market Index was a scant 2.1% during the same
period. Like the U.S. the magnitudes of these two
metrics were very different but similar in direction.
In 2005 Jay Ritter, a professor at the University of
Florida, published a comprehensive paper on the
subject of economic growth and stock market returns
for 16 countries.1
His results confirm the relationships
mentioned above, that economic growth and stock
market returns move in the same direction across
several decades or more but vary greatly in magnitude.
Ritter’s data set goes back to 1900, demonstrating
that these trends have been robust over the long run.
While long-term trends may be similar, Ritter also
showed that the correlation between annual economic
growth and market returns in these countries were
negative. His analysis ran from 1970 through 2002
for developed-markets countries, and 1988 through
2002 for emerging-markets countries. Recall that
a correlation of 1 means GDP and market returns have
a strong relationship (they move together), negative 1
means they move in opposite directions, and 0 indicates
that there is no relation between the two. Using
annual data from the Federal Reserve Economic Database
and MSCI, I examined the correlation between
annual nominal GDP and market returns for the U.S.
and four of the more prominent emerging markets
during the past two decades. The results in Exhibit 1
show that economic growth and stock market performance
in each of these countries had a near-zero or
even negative correlation from the mid-1990s through
2016. The one exception was India, which had a mild
positive relationship between nominal GDP growth
and total market returns. Exhibit 2 extends the analysis
across the same time periods using per capita GDP for
each country.
Given Ritter’s findings, these results should not come
as much of a surprise. Both data sets demonstrate
that there hasn’t been much of a link between annual
economic growth and market returns for these five
countries. A stronger relationship between the
two would require that corporate profits come mostly
from a firm’s domestic economy. But many of the
largest and most profitable firms in these countries are
also major multinational companies that generate
a substantial portion of their profits outside of their
domicile. It’s also important to realize that unlike
economic growth, stock markets are discounting
machines. That is, stock prices are constantly
adjusting to new information, including economic
growth rates, as it becomes available. Therefore, stock
prices and returns are likely to deviate from underlying
economic conditions based on the expectations of
market participants.
This doesn’t mean that stocks listed in emerging
markets are poor investments. There are reasonable
arguments to be made for owning stocks from these 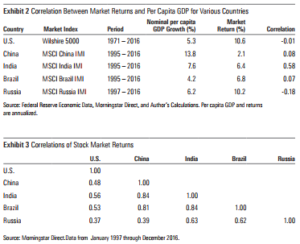 regions. They can expand an investor’s opportunity
set, and the returns from stocks listed in these markets
don’t always move in the same direction as those from
the U.S. or other developed regions, which means
they can provide a certain amount of diversification.
The correlation matrix in Exhibit 3 shows how the
returns from these various markets have behaved
relative to each other.
While stocks listed in emerging markets can help
diversify a portfolio of U.S. stocks, they also carry
greater risk. From February 1988 through December
2016, the volatility of the MSCI Emerging Markets
Index was 23.0% compared with 14.3% for the MSCI
USA Index. There are other forms of stock-specific
risk that investors should be aware of. For example,
state-owned (or otherwise influenced) enterprises
represent some of the largest companies in some of
these countries, particularly in China. (State-owned
enterprises are publicly traded firms that are partially
owned by government agencies, thus introducing
potential conflicts of interest between government
interests and those of other public shareholders.)
Diversification across stocks, regions, and countries
is critical when investing in these markets.
The simplest way to approach investing in emerging
markets is to start with a fund tied to a market-capweighted
emerging-markets stock index. Morningstar
evaluates a number of market-cap-weighted funds,
which are highlighted in Exhibit 4. These include
iShares Core MSCI Emerging Markets IEMG,
Vanguard FTSE Emerging Markets ETF VWO, and
Schwab Emerging Markets Equity ETF SCHE. The
expense ratio on each of these funds is among the
lowest in the diversified emerging-markets Morningstar
Category, which should provide them with a longterm
advantage over their more-expensive category
peers. However, investors should be aware that
approximately 25%–30% of these funds are invested
in stocks from China, thus limiting their diversification.
DFA Emerging Markets Portfolio DFEMX and DFA
Emerging Markets Core Equity Portfolio DFCEX avoid
this concentration in Chinese stocks by directly
constraining their country weightings to a maximum of
17%. These funds also include modest tilts toward 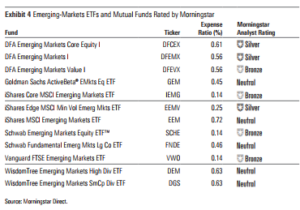 companies that are smaller, more profitable, and
have lower valuations. However, DFA charges a higher
fee for this strategy.
Another solid choice is iShares Edge MSCI Minimum
Volatility Emerging Markets EEMV. This fund
uses an optimization routine that attempts to
construct the least-volatile portfolio of stocks from the
MSCI Emerging Markets Index, subject to several
constraints. While this fund charges a modestly higher
fee, it may be a better choice for investors who are
more risk-averse but desire exposure to emergingmarkets
stocks. It also has a lower allocation to stocks
from China.