Finalytix.caMarket Outlook We get signals that the system is under enormous stress – Mohamed El-Erian 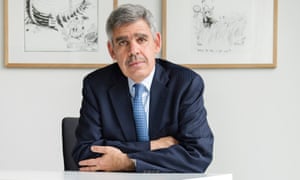 Leading economist and investor believes world leaders, and global capitalism, have reached fork in road between equality and chaos

Retreat from globalisation will destabilise the world economy

Why aren’t the financial markets in uproar at the loss of so many supposed certainties? On Brexit, El-Erian says politicians were smart to slow down the process, extend the timetable and avoid being forced into decisions by markets. It allowed investors to stop obsessing over “hard” and “soft” forms of exit and think in terms of “slow Brexit”.

“We are still now in the pause phase, including up to and after your general election. Thereafter markets will slowly, and I stress slowly, start to get impatient and start to pay more attention than they have before now to negotiating stances on both sides.”

Similarly with Trump: the protectionist part of his campaign, which was meant to be scary for markets, looks less frightening today. In fact, says El-Erian, protectionism was never a “day one” problem: “He inherited a spaghetti bowl of trade agreements.” At the end of the day, El-Erian expects concessions that allow the president to say trade is “still free but fairer”.

What was the day one issue? “The legacy of too many years of low growth and insufficiently inclusive growth: that the breakage to the system accumulates over time and it’s very hard to predict tipping points.”

Guardian Today: the headlines, the analysis, the debate – sent direct to you

This is the nub of El-Erian’s analysis of why the developed world is approaching a fork in the road. The inequality generated by the current low-growth climate has three elements: inequality of wealth, income and opportunity. The last of the three – manifested in high youth unemployment in many eurozone countries, for example – is the most explosive element.

“The minute you to start talking about the inequality of opportunity, you fuel the politics of anger. The politics of anger have a tendency to produce improbable results. The major risk is that we don’t know how much we’ve strained the underlying system. But what we do know is we are getting signals that suggest it’s under enormous stress, which means the probability of either a policy mistake or market accident goes up.”

The head-scratching part is that financial markets are not reflecting these worries. Measures of volatility stand at their lowest since 1983. “If you talk to investors, they will tell you how worried they are about geopolitics,” says El-Erian. “And, if you ask them how they are positioned, they will tell you ‘almost maximum risk’.”

There is an explanation of sorts, he thinks. Investors have been conditioned to think central banks can suppress volatility. They also see that the low growth appears stable. And they think the piles of cash on some companies’ balance sheets will come their way in the form of dividends and share buybacks. “You need a major shakeout to change that mindset,” he says.

But there is “unambiguous evidence” that these “artificial” conditions can’t last, he says. After the financial crisis of 2008-09, there was a small chance to engineer a new growth model in which governments would come through with infrastructure spending and reforms.

Instead, the sense of urgency went away. Central banks stemmed the crisis, but the rest of the package didn’t follow. We are now seeing the limits of relying on central banks, El-Erian believes.

How do we take the high, benign road? El-Erian has a four-point plan.

First, “we need to get back to investing in things that promote economic growth, infrastructure, a more pro-growth tax system for the US, serious labour retooling … If you’re in Europe, youth employment is an issue you’ve really got to think about very seriously.”

Second, countries that can afford to do so must “exploit the fiscal space,” meaning borrowing to invest or cutting taxes. He puts the US and Germany unambiguously in that category “and to a certain extent the UK”.

Third, pockets of extreme indebtedness must be addressed, a lesson he learned working with the IMF in Latin America in the 1980s. “When you have a debt overhang, it’s like a black cloud,” he argues. “It sucks oxygen out of the system. You cannot grow of it: whether it’s Greece or student loans in the US, you need to deal with debt overhangs.” The process of debt forgiveness is hard, he concedes, because some people are unfairly rewarded – “but the alternatives are worse.”

Fourth, regional and global governance needs repair. He compares the eurozone to a stool with one-and-a-half legs instead of four. The complete leg is monetary union, the half is banking union. The missing legs are fiscal integration, meaning a common budget, and political harmonisation. No wonder the eurozone is unstable, he says: “You can do three legs, you can’t do one and half.”

To return to El-Erian’s core T-junction analogy, none of the required manoeuvres sound easy. “You don’t need a big bang,” he replies. “If you want to take the good turn you have to see some progress on some of these elements. If you don’t, then we take the other turn.” He ascribes equal probabilities – “it’s a political judgment.”

What’s an investor to do? El-Erian says his own approach, which he admits is hard for the average person to copy, is framed like a bar-bell. At one end, he’s invested in high-risk startups where you don’t need all to succeed. At the other, he’s in cash and cash-like investments. In the middle, he’ll invest in public markets only tactically.