Why the markets are ignoring the global turmoil – Nouriel Roubini

Finalytix.caResearch Why the markets are ignoring the global turmoil – Nouriel Roubini

Why the markets are ignoring the global turmoil – Nouriel Roubini 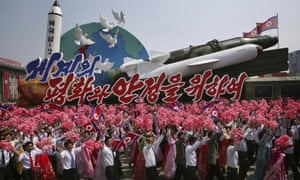 With Emmanuel Macron’s defeat of the rightwing populist Marine Le Pen in the French presidential election, the EU and the euro have dodged a bullet.

But geopolitical risks are continuing to proliferate. The populist backlash against globalisation in the west will not be stilled by Macron’s victory, and could still lead to protectionism, trade wars, and sharp restrictions to migration. If the forces of disintegration take hold, the UK’s withdrawal from the EU could eventually lead to a breakup of the trade bloc – Macron or no Macron.

At the same time, Russia has maintained its aggressive behaviour in the Baltics, the Balkans, Ukraine, and Syria. The Middle East still contains multiple near-failed states such as Iraq, Yemen, Libya, and Lebanon. And the Sunni-Shia proxy wars between Saudi Arabia and Iran show no sign of ending.

In Asia, US or North Korean brinkmanship could precipitate a military conflict on the Korean peninsula. And China is continuing to engage in – and in some cases escalate – its territorial disputes with regional neighbours.

Despite these geopolitical risks, global financial markets have reached new heights. So it is worth asking if investors are underestimating the potential for one or more of these conflicts to trigger a more serious crisis, and what it would take to shock them out of their complacency if they are.

There are many explanations for why markets may be ignoring geopolitical risks. For starters, even with much of the Middle East burning, there have been no oil-supply shocks or embargos, and the shale-gas revolution in the US has increased the supply of low-cost energy. During previous Middle Eastern conflicts – such as the 1973 Yom Kippur war, Iran’s Islamic revolution in 1979, and Iraq’s invasion of Kuwait in 1990 – oil-supply shocks caused global stagflation and sharp stock-market corrections.

A second explanation is that investors are extrapolating from previous shocks, such as 9/11, when policymakers saved the day by backstopping the economy and financial markets with strong monetary and fiscal policy easing. These policies turned post-shock market corrections into buying opportunities, because the fall in asset prices was reversed in a matter of days or weeks.

Third, the countries that actually have experienced localised asset-market shocks – such as Russia and Ukraine after Russia’s annexation of Crimea and incursion into eastern Ukraine in 2014 – are not large enough economically to affect US or global financial markets. Similarly, even as the UK pursues a “hard Brexit”, it still accounts for only about 2% of global GDP.

A fourth explanation is that the world has so far been spared from the tail risks associated with today’s geopolitical conflagrations. There has not yet been a direct military conflict between any major powers, nor have the EU or eurozone collapsed; Donald Trump’s more radical populist policies have been partly contained; and China’s economy has not yet suffered from a hard landing, which would create sociopolitical instability.

Markets have trouble pricing such “black swan” events: unknown unknowns that are unlikely but extremely costly. For example, the market could not have predicted 9/11. And even if investors think another major terrorist attack is likely, they cannot know when.

A confrontation between the Washington and Pyongyang could also turn into a black swan event, but this is a possibility that markets have happily ignored. One reason is, notwithstanding Trump’s bluster, the US has few realistic military options: North Korea could use conventional weapons to wipe out Seoul and its surroundings, where almost half of South Korea’s population lives, were the US to strike.

Investors may be assuming that even if a limited military exchange occurred, it would not escalate into a fully fledged war, and policy loosening could soften the blow on the economy and financial markets. In this scenario, as with 9/11, the initial market correction would end up being a buying opportunity.

But there are other possible scenarios, some of which could turn out to be black swans. Given the risks associated with direct military action, the US is alleged to be using cyber-weapons to eliminate the North Korean nuclear threat against the US mainland. This may explain why so many of North Korea’s missile tests have failed in recent months. But how will North Korea react to being militarily decapitated?

One answer is that it could launch a cyber-attack of its own. North Korea’s cyber-warfare capabilities are considered to be just a notch below those of Russia and China, and the world got an early glimpse of them in 2014 when it hacked Sony Pictures. A major North Korean cyber-attack could disable or destroy parts of the US’s critical infrastructure and cause massive economic and financial damage.

That remains a risk even if the US can sabotage North Korea’s entire industrial system and infrastructure. Or, faced with disruption of its missile programme and regime, North Korea could go low-tech, by sending a ship with a dirty bomb into the ports of Los Angeles or New York. An attack of this kind would most likely be difficult to monitor or stop.

So, while investors may be right to discount the risk of a conventional military conflict between the US and North Korea, they also may be underestimating the threat of a true black swan event, such as a disruptive cyberwar between the two countries or a dirty bomb attack against the US.

Would an escalation on the Korean peninsula be an opportunity to “buy the dip” or would it mark the beginning of a massive market meltdown? It is well known that markets can price the risks associated with a normal distribution of events that can be statistically estimated and measured. But they have more trouble grappling with “Knightian uncertainty”: risk that cannot be calculated in probabilistic terms.

• Nouriel Roubini is a professor at NYU’s Stern School of Business. He was a senior economist for international affairs in the Clinton White House and has worked for the International Monetary Fund, the Federal Reserve and the World Bank.

Does It Make Sense to Hold Strategic Bond Funds in Your Portfolio? – Morningstar