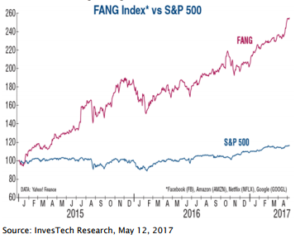 Investing in an Aging Bull Market
It has been eight years since the bottom of the last
major bear market and economic recession. This marks
the second longest bull market in Wall Street history, as
well as the third longest economic expansion over that
timeframe. While this is an interesting statistic, it has
very little practical value in telling us when the cycle will
turn again. As the old stock market saying goes, bull
markets do not die of old age. With old age, though, we
typically find excesses in the market, increasing the need
to focus on risk management.

Given the severity of both the recession and bear market
of 2009, it may be possible for this expansion to push
on for longer, surpassing even the decade long bull
market of the 1990’s. During the 1990’s we had what
was referred to as the “Goldilocks” economy – a perfect
balance of moderate growth and low inflation which
allowed for a market-friendly monetary policy. In the
most recent Bank of America Merrill Lynch Fund Manager
Survey, an all-time high 34 percent of respondents
described the current economy as fitting the “Goldilocks”
standard.

This backdrop helped global equity markets continue
their upward march over the last three months. Nearly
all major markets posted gains in the second quarter,
with one exception being Canada. Bond markets around
the world also rallied as the perceived pick-up in
inflation seemed to moderate.
Housing – a major support or risk for the consumer and
the economy?
Consumer spending accounts for roughly two-thirds of
U.S. GDP and is a major driver of the economy. The
housing market is an important contributor to consumer
confidence since home values are the largest part of net
worth for most individuals. People feel wealthier when
home prices are rising, leading to increased confidence
and, in turn, spending.

The U.S. market has almost recouped its losses from the
2006 bubble and continues to gather steam with a
relatively low home inventory, healthy buyer demand and
increasing builder confidence. This price recovery is
supportive of continued improvement in the economy.
Ironically, this may be too much of a good thing if it
pressures the Federal Reserve to continue to hike rates.
Canadian housing, on the other hand, had only a slight
correction back in 2006 and has seen a number of
specific markets increasing at an unsustainable pace.
Signs of speculative excess have come to light causing
the Bank of Canada to take note. Regulators have taken
steps to tighten conditions and enable a soft landing,
but that is never an easy task.

The central bank recently acknowledged that Toronto is
now a bigger concern than Vancouver and, most
worryingly, it is much more heavily indebted. A
correction in the Toronto market would have far
reaching implications given that the region has been
responsible for nearly half the country’s employment
growth over the past two years. The Conference Board
of Canada estimated that Toronto’s economy grew by
roughly 3.4% last year, accounting for nearly half of the
country’s growth in GDP.

Currently, both the U.S. and Canadian housing markets
are a significant support for their respective economies.
However, the overall Canadian economy is at greater risk
with the possibility for select overheated real estate
markets to pull-back significantly. We don’t know when
or if that will happen (corrections can sometimes go
sideways rather than straight down), but it suggests the
need for a prudently diversified Canadian equity
portfolio.
Source: NBF Economics & Strategy (Teranet-National Bank, Case-Shiller
via Datastream)

Risk Management
While markets continue to appreciate, a more
pronounced divergence between the haves (growth) and
have-nots (value) is developing. The first quarter of the
year saw the largest quarterly outperformance of growth
stocks versus value stocks in the Russell 1000 Index
since 2009. That gap has continued to widen since then.
In particular, a handful of growth stocks have been
major beneficiaries. The so-called “FANG” stocks
(Facebook, Amazon, Netflix, and Google) have soared in
value to the point that these four companies have
contributed nearly one-quarter of the gain in the S&P
500 since the beginning of 2015.

In times like these our risk management process can feel
more like a liability than an asset. In trying to maintain a
reasonably valued portfolio with sound balance sheets,
we end up trimming or selling holdings that continue to
advance from expensive to really expensive, leaving
gains on the table. We aim to recycle a dollar of capital
into an investment that we believe has less downside
risk and a greater likelihood of delivering aboveaverage
gains into the future. This new investment may
require a catalyst or change in market sentiment to
begin to appreciate, therefore patience is warranted.
Any type of “risk management” during a bull market
tends to reduce the portfolio’s return. As difficult as it
may be to watch the markets outperform when investors
are feeling comfortable, we believe that long-term
investing success depends not only on how much you
make in the up markets, but also how much you
preserve in the down ones.
We will continue to invest based on our risk management
principles, even at the risk of short-term underperformance.

Canadian market
Oil prices corrected significantly in the quarter,
suppressing returns for the Canadian marketplace. We
must also remember that the Canadian market was one
of the best performers in 2016, so a more muted return
this year should be expected. While there will certainly
be ongoing price volatility in our energy holdings, we
believe it is one of the few sectors offering attractive
valuations relative to the overall market.

Outlook for future returns
Not much has changed from our previous view. An
improving economy does not necessarily mean an
improving investment environment. Valuations, which
were already high prior to the advance, continue to edge
upwards. With elevated valuation levels, the margin of
safety on the downside is less than we’d like and the
upside return potential remains subdued.

IMF raises outlook for economic growth in Canada, expected to be tops for G7- Canadian Press |