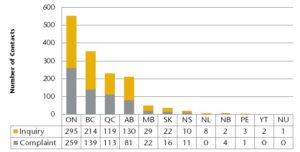 Unsuitable investments generate the most complaints by investors to the Investment Industry Regulatory Organization of Canada (IIROC) about the securities dealers the self-regulatory organization (SRO) regulates, according to a new report from IIROC released on Monday.

IIROC received 838 complaints between April 2014 and March 2016, and 222 of those complaints (or 26%) were about the use of unsuitable investments. Other complaints that investors cited include service issues, disputed fees, firm policies and procedures, and unauthorized trading. These five issues accounted for 48% of all complaints to IIROC.

The topic of unsuitable investments also made its mark in IIROC’s 2015 enforcement report, which showed that close to 50% of prosecutions against individual registrants involved violations of suitability requirements.

“It’s not surprising that suitability is the top investor complaint as it continues to be the No. 1 matter that IIROC prosecutes every year,” says Andrew Kriegler, president and CEO of IIROC, in a statement. “The trend of unsuitable investments reinforces exactly why IIROC needs and is committed to seeking more effective enforcement powers under provincial securities legislation so all investors, particularly seniors and vulnerable investors, are better protected.”

In conjunction with publishing these statistics, IIROC has issued confidential complaints and inquiries statistics reports to all the firms it regulates. Most dealers received firm-specific information and rankings that compare the firm with its peers. Other dealers received general statistics only, due to the nature of their business and small number of investor contacts, according to the SRO’s announcement.

“We wanted to share this important information with IIROC-regulated firms to help them improve their compliance and customer service,” says Warren Funt, vice president of IIROC in Western Canada, in a statement. “Going forward, dealers will receive an annual complaints and inquiries report so they can strengthen their internal processes and reduce the number of complaints.”

WHAT REGULATORS ARE TELLING CLIENTS ABOUT FEES – Advisor.ca